In conversation with Syra Shehroz

Buraq Shabbir
"The actress talks about her role in Project Ghazi, portrayal of women on television and how she handles criticism"

Having made her debut with drama serial Mera Naseeb in 2011, actress Syra Shehroz has quickly risen through the ranks, both as a star and as an actor. These days, for instance, you can spot her across billboards around town as well as in fashion campaign(s).

The model-turned-VJ-turned actress is not a one-hit wonder though and proved as much when she worked alongside some of Pakistan’s most distinguished actors like Marina Khan, Behroze Sabzwari, Asif Raza Mir, Badar Khalil in the sequel to the iconic drama series, Tanahaiyan called Tanhaiyan Naye Silsilay.

After experimenting with television serials and tele-films for some time, Shehroz, like many of her contemporaries, has made the leap to cinema. She made her big screen debut with a cameo in this year’s first major release – Ho Mann Jahaan – and is now gearing up for her next film, Chalay Thay Sath in which she is essaying the lead role.

In addition, Shehroz has also bagged a lead role in Project Ghazi alongside actor Sheheryar Munawar with whom she shared screen space in Ho Mann Jahaan.

What’s interesting is that both of her upcoming film roles have a progressive edge. In Chalay Thay Sath, she essays the role of a doctor and in Project Ghazi, she is playing a scientist.

“It’s a character of a scientist; a very independent kind of a woman,” Shehroz noted while speaking to Instep about television, cinema and much more.

Project Ghazi, slated to release next year, has an intriguing cast featuring the likes of Humayun Saeed and also has the honour of being Pakistan’s first ever superhero film. Calling it her dream project, Shehroz noted, “The whole movie, the way it has been put together is something I always wanted to be a part of. For me, it’s like a dream project.”

The character she is playing in Project Ghazi is in complete contrast to her role in Chalay Thay Sath. What’s delightful to note is that in both films she is essaying the role of a strong, working woman, not a weeping willow. It’s also a contradiction when one compares it to television where actresses often end up playing regressive roles.

“I think it’s about time we stop portraying women as weak beings so that the audience sympathizes with them,” noted Shehroz when asked what she makes of this dangerous trend that is far too common to be ignored.

“Though we are a lot more realistic with our dramas and storylines, we do need to be a little more realistic and move past the stereotype that a woman is a bechari and we need to feel bad for her. There is much more to a woman’s character that just that!” said Shehroz.

Having shot for one of her films and gearing up for the second one, Shehroz describes her transition from television to films to be great. She believes it’s a fantastic opportunity for an actor to do films since films allow them to know their character at every moment. “There is no rushing through anything; it’s a wonderful experience for actors to do a film,” the 28-year-old star stated.

While she is more interested in doing films now, she doesn’t mind giving time to television as well. “I can’t say no to television because it is what we all started with and one cannot deny that we have a huge audience when it comes to television,” observed Shehroz.

That said, only an intelligent project can pull her back to the world of television.

When it comes to accepting roles Shehroz looks for how the character moves with the film and what impact it is going to have on the audience. What’s obvious is the fact that Shehroz wants to experiment with diverse roles and is open to playing a negative character. “When I was doing dramas, I did try out a negative one,” she told Instep. “It’s actually very refreshing for an actor since it allows them to explore their boundaries and see what all they can do with themselves.”

Shehroz started off with modeling and then moved onto acting. The beautiful actress, who has been associated with popular labels such as Alkaram and Zara Shahjahan, is often criticized for being just a petty face. But Shehroz doesn’t let such criticism pull her down.

“If I couldn’t act, I wouldn’t be offered roles where I need acting,” she asserted. “I believe in myself and I believe that I probably can pull off roles which is why I am being offered these roles. I am very comfortable with the camera and the way I act.”

Sharing a comment that she once came across, Shehroz noted, “I read a comment once which said ‘pretty face, great for billboards but zero acting skills!’. It’s not my fault that I have a pretty face (laughs).”

Married with one child, Shehroz believes that the Pakistani film industry doesn’t hold any bias against married women and it doesn’t affect their progress in anyway unlike Bollywood. “Our industry is pretty open in that sense,” she explained. “This happens in Bollywood that if you’re married your career goes down. It is rare to find actresses who still have the same value even after marriage.”

Aside from Pakistani films, Shehroz maintained that she has been offered roles in Bollywood and Hollywood. But working outside of Pakistan is not a serious ambition for her. “It’s not my goal to work there,” revealed Shehroz. “If a good opportunity comes my way, there is no harm in accepting that but I prefer working in our industry.”

While Syra Shehroz certainly considers cross-border cultural exchanges to be of significant value, she isn’t interested in doing the typical Bollywood thing. “I won’t go for a role unless I am comfortable with it,” she noted. “I take my roles very seriously so I would only go for something that is impactful.”

She will make an exception for Salman Khan since she is a huge fan of the superstar. And, as for future projects, Shehroz explained that though she’s received several offers, she is focused on her current projects. “Right now I want to focus on what I am doing. I am content with what I am doing in terms of my career. I won’t do any other work this year unless it is something exceptional.” 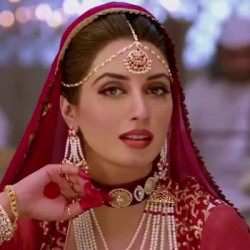