The Hunger Games: Mockingjay – Part 2
Genres:
In Theaters:
Runtime:
With the nation of Panem in a full scale war, Katniss confronts President Snow in the final showdown. Teamed with a group of her closest friends – including Gale, Finnick, and Peeta – Katniss goes off on a mission with...
Read More 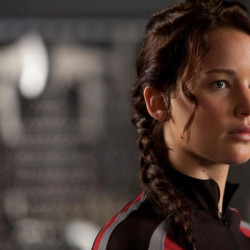 The Hunger Games
Genres:
In Theaters:
Runtime:
Every year in the ruins of what was once North America, the nation of Panem forces each of its twelve districts to send a teenage boy and girl to compete in the Hunger Games. Part twisted entertainment, part government intimidation...
Read More